At first for the uninitiated, Yo-Kai Watch 2 Psychic Spectres may appear to be some kind of Pokemon clone. This is a fair parallel. Sure it’s a “collect them all” kind of game, but as much as Yo-kai Watch may seem like Pokemon, it differs just as much.

Psychic Spectres is the melding of Yo-kai Watch Bony Spirits and Fleshy Souls, two parts of the same game, with slightly different areas and exclusive Yo-kai to collect. Along with the two previously released titles, Psychic Spectres includes some new adventures and, naturally, some new ghosty friends to join you in your quest.

For those who have played either title in the past, don’t expect too much new from the story, as it’s pretty much just these two games as they were originally released — with the extra stuff tacked onto the side. Naturally, the central gameplay remains the same. This really is the biggest downfall of the game for returning players. There might not be enough new stuff to garner your interest.

With that being said, I gotta admit, I never played Bony Spirits or Fleshy Souls. This was a brand new experience for me and I’m kinda glad it was, otherwise I would have been pretty sad to find out that I’m not really getting much new content for my money. I came into this game ignorant. I knew nothing about Yo-kai Watch at all except that it was about ghosts and befriending them using a special watch. You could say when I turned on the game for the first time and was welcomed with a weird and strange music video I did feel like I wasn’t too sure what I was getting into. 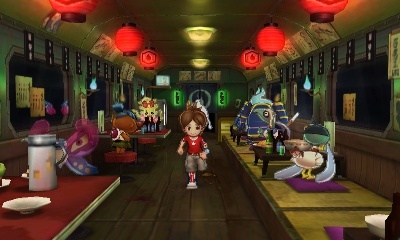 Early on it establishes a storyline which was interesting enough to keep me entertained. From the looks of things, it’s almost like repeating the original Yo-kai Watch story under the guise of the main character having lost their memories and finding out about the world of Yo-kai again, fresh and anew. The first Yo-kai you encounter is Whisper, who is more-or-less a traditional style ghost. You know a white floating blob. He’s pretty much your guide throughout the game. The next Yo-kai you come across is Jibanyan, the Ghost of a cat that was tragically run down by a truck. I like Jibanyan. He’s my favourite and hilarious and his backstory is heartbreaking. From then on though it seems like most every other Yo-kai you encounter, the developers turned to each other and said “You know what, let’s just make some crazy ass, weird and creepy things. You know like the later generations of Pokemon.” I’d be lying if I said many of them didn’t rustle my jimmies. I called this guy Larry David, for obvious reasons.

When you start your adventure, you need to decide which of the original games’ stories you want to visit. It’s ok though, because even though there are different Yo-kai and slightly different things going, you know you’re going to be able to go to the other and get the rest.

The battle mechanics are something I wasn’t really a fan of. As you befriend different Yo-kai, they agree to join you in battle, at your beck and call. Importantly, you need to arrange your chosen Yo-kai onto a rotating wheel where the three at the top are those who you want to be currently in the fight, and the three of the bottom patiently waiting to be moved to the front lines. At any time you can spin the wheel to change your lineup, with as little as one place to the left or right or up to three places, changing it completely. Oh, right. How are you going to get ’em? Skeleton power?

Early on it doesn’t really matter where you put them on this wheel, but as you progress it starts to get important, because you do get bonuses for having same type Yo-kai next to each other. As for the actual battles, well, the Yo-kai pretty much handle that themselves, attacking on their own. At first, all you really need to do is sit back and watch. If you like you can use a Soultimate power which is a special move for a Yo-kai accompanied by an unskippable video of them performing this power, once you have completed a short mini-game to activate it. 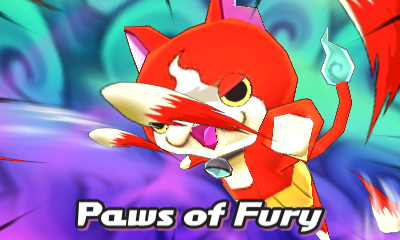 This was the only unskippable cutscene I liked watching over and over again.

As the game continues your involvement increases a little. For example, you have the ability to set a focus on one enemy when there are multiple in battle, using items to help or heal your Yo-kai friends and, of course, rotating the wheel of Yo-kai to make sure you’ve got the right offensive or defensive players at any given time.

The lack of any real interaction, especially early on, is extremely frustrating, with you just sitting there watching the Yo-kai doing basically whatever the hell they please. Quite often I sat there watching the Yo-kai do stupid things that they didn’t need to do, like cast spells, when all one of them needs to do is attack deplete the last few hit points on the enemy. I have to say though, in the later stages of the game it doesn’t feel like you’re taking as much of a backseat. There is some complication involved into actually winning some of these battles. In fact, sometimes I found them too hard and frustrating. It could have just been because it was a new style of gameplay mechanic to me but I wasn’t a fan and quite often it would feel like a chore. There just seemed to be no in-between. You’ll see this place. A lot.


Even though there is a lot to do in the game, much of it is going back and forth, backtracking which, once again is another thing that got on my nerves. The gameplay is also quite repetitive and for the most part on the easier side. Just as I started to enjoy and appreciate the game for what it was, it was nearing the end. Because of its downfalls, I can’t see myself wanting to play this game more than once, but for those who are fans and want to experience everything within the world of Yo-kai Watch, there might just be enough extra content in here to warrant you playing through again? Yes, that is a question and not a statement.

What kept me going, however, was how nice the game looks. The story is also surprisingly captivating and legitimately interesting and the humour, while at times a little juvenile and crude and did make me laugh out loud. The gameplay though just isn’t up to scratch.

For those who enjoy the series, Yo-kai Watch 2 Psychic Spectres is more than likely a must have. Even though the extra content included might be a little minimalist, there's probably enough in there to keep you happy. Even though the gameplay is repetitive and battles are mostly hands-off for a good chunk, the game is very nice to look at and is highly polished on the visuals front. The story is interesting enough and legitimately funny.

The Witcher 3 on Switch gets a massive update with PC save compatibility, gra...
500