Speeding along kaleidoscopic highways punctuated by a thumping mix of synthwave beats is an absolute thrill in the 16-bit racer 80’s Overdrive. However, a stuttering career mode and extremely limited margin for error halt the complete feeling of being in a Kavinsky music video.

Styled after the classic Out Run games, 80’s Overdrive doesn’t so much wear its influences on its sleeve as it does shout them from a neon-lit street corner. Aesthetically speaking, 80’s Overdrive employs the staple blues, pinks and greens at every corner. Cars look like they’ve been transported straight from the game’s namesake decade, in addition to the flamboyant splashes of colour emblazoned upon the various locales. Yep, this is definitely an 80’s game — a pretty damn good one at that. 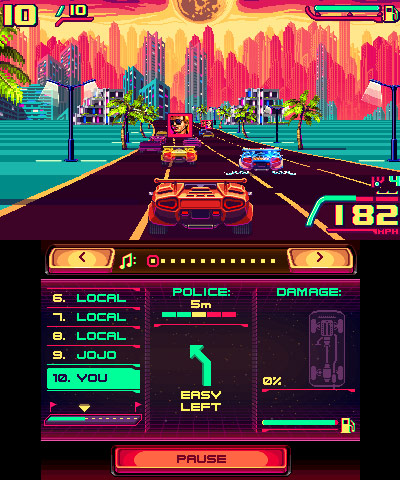 80’s Overdrive features three game modes: career, time-attack, and a track editor for the aspiring circuit designers. Unsurprisingly, career is where the bulk of the content takes place. Players begin by purchasing a cheap car, and proceeding to attempt the various races via a selectable map. Similar to Gear.Club Unlimited (the last game I reviewed), 80’s Overdrive awards players money and up to three championship points for placing on the podium. These points are essential to progress further and unlock more races, which presents the exact same issues I encountered with Gear.Club Unlimited. It is easy to get stuck in a series of difficult races with no way to progress forward. Compounding this is the constant need to upgrade and purchase better cars to remain competitive, lest you want to admire the pretty scenery while lingering in 10th place. However, this is a fundamentally flawed system when you factor in refuelling between races, repairing car damage, and that every race has a buy-in fee for each attempt. All of these factors quickly become expensive, to the point where progressing further on difficult tracks becomes excruciatingly difficult. As good as the racing feels, it punishes the slightest mistakes. Making light contact with another car brings your vehicle to a screeching halt, allowing the entire field of AI drivers to roar past and gain what is almost always an insurmountable lead. Combine this with the police presence on some tracks whose sole purpose is to make you crash, the odds feel heavily stacked against the player. As mentioned before, having to pay for vehicle repairs on top of a race entry fee adds up, which makes crashing and losing a race all the more frustrating. On one hand, this adds a thrilling high-risk element synonymous with the car chase vibe 80’s Overdrive strives to achieve, but the price of failure is too high to encourage the “one more try” approach. Not quite so brutal is the time-attack mode, the most obvious nod to the Out Run games before it. Simple by nature, time-attack tasks players with reaching checkpoints within a time limit. Reaching a checkpoint adds more time to the clock and seamlessly leads players to another location for their synth-driven journey to the next checkpoint. Racking up points the further you drive, it is telling that the clock tracking your time driven measures in seconds, minutes, and hours. Dodging traffic and veering around tight corners while attempting to beat your best time is the most unadulterated fun 80’s Overdrive offers, especially considering failure yields no further consequence beyond starting again.

Unlike my observations of Gear.Club Unlimited, whose identity crisis of wanting to be both a simulation and an arcade racer dragged it down, 80’s Overdrive knows exactly what it wants to be, and achieves its vision with confidence. As frustrating as the career mode can be, 80’s Overdrive lands the most important part of any racing game – the driving feels fun. Driving in this game may not be overly complicated or fancy, but controlling the 80’s beasts on wheels at well over 300 km/h while delicately weaving through tight traffic feels fantastic, in-part due to the fantastic synthwave soundtrack accelerating the action at every corner. A neon-soaked ode to the popular arcade racers from a bygone era, 80’s Overdrive offers thrilling driving and a banging synthwave soundtrack, but the imbalanced and frustrating career mode scratches the paint of the overall experience.

A neon-soaked ode to the popular arcade racers from a bygone era, 80's Overdrive offers thrilling driving and a banging synthwave soundtrack, but the imbalanced and frustrating career mode scratches the paint of the overall experience.